Theatre Royal Glasgow has been in operation since 1867. While the theatre had been rebuilt twice in the 1800s, it still stands on what is now Hope Street in Glasgow, Scotland. Filled with history, this theatre is a must-see when traveling through the city. 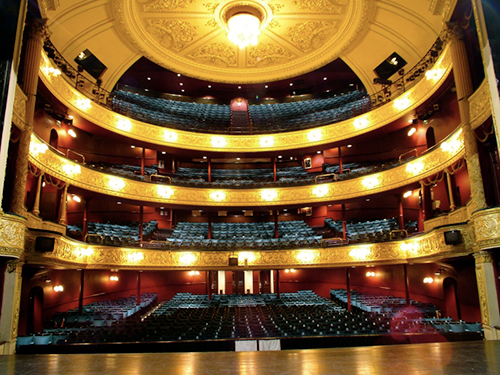 The History of Theatre Royal Glasgow

First opening as the Royal Colosseum and Opera house in 1867, the theatre has since changed names. Original owner James Baylis ran the theatre for just 4 years. In 1869, the theatre, still owned by James at the time, went on to be leased to Glover & Francis. At this time, the Theatre Royal name would be seen.

A fire would cause the building to be left in disarray in 1879. At this time, the auditorium was fully destroyed. Upon rebuilding, the theatre took on the French Renaissance design which is still in place today. The rebuild also saw a third gallery added as well as a change in the front door to face Hope Street. The architect that directed the rebuilding was Charles J. Phipps.

The theatre would change hands in 1877 and 1888 before being sold to Howard & Wyndham in 1895. The duo added plays, summer shows and even opera into the theatre’s lineup of shows. This proved to be a very big success with the group owning the theatre until 1957.

Ironically, the theatre succumbed to another fire in 1895 that saw the auditorium destroyed. Luckily, Phipps was commissioned again to oversee the rebuilding process. Phipps ensured that there were very little differences seen during the rebuild to keep the same French Renaissance design that the theatre was famous for.

The current owners, the Scottish Opera, purchased the building in 1974 and still own it today. Immediately upon purchase, a major rebuild took place that would bring the building back to its former glory. The rebuild comprised of the following:

The refurbishment proved to be a major success with Die Fledermaus being shown in October of 1975 during the theatre’s reopening.

Refurbishments took place again in 1997 and brought rewiring and decoration improvements to the theatre. In 2005, the building was leased to the Ambassador Theatre Group.

There is a four tier seating arrangement seen. Guests can choose to sit on the following tiers:

The theatre wants to ensure that all patrons are accommodated appropriately. When purchasing tickets at the door, the following is to be remembered:

Guests are reminded to show up 45 minutes before the show begins. This will allow for the shortest queue lines and will allow guests to get situated before the curtain rises.

The Ambassador Lounge allows all guests to enjoy a VIP moment. Prices range from 5 – 45 pounds, depending on the package chosen. Guests can purchase a lounge package prior to the show. The packages, divided into labels, include a wide variety of drinks, nibbles, chocolates and other benefits.

If you choose to visit the lounge, keep in mind that the Green Label must be pre-booked. Arrive early to enjoy a drink before your big show.

Getting to the Theatre

Located at 282 Hope Street, patrons will be able to get to the theatre by using the following methods:

Trains run through to Queen Street. These trains are just a few minutes, by foot, from the show. The Central station is the ideal choice and is located very close to the theatre’s main door.

Buses that arrive at Buchanan Bus Station are very close to the theatre. Simply go to Killermont Street, and turn right on Hope Street. The Theatre Royal will be directly on your right.

You can take a coach that will drop you off right in front of the theatre.

Shows run all year long with everything from Dangerous Corner to Top Hat playing. The theatre recommends that you book tickets early to ensure that you are able to snag a ticket with good seating. Handicap accommodations are easily made. Just call the venue ahead of time if you have any questions or concerns regarding handicap issues.

You can find the address here, get contact details here and take a look at the seating plan here.

This website uses cookies to improve your experience while you navigate through the website. Out of these cookies, the cookies that are categorized as necessary are stored on your browser as they are essential for the working of basic functionalities of the website. We also use third-party cookies that help us analyze and understand how you use this website. These cookies will be stored in your browser only with your consent. You also have the option to opt-out of these cookies. But opting out of some of these cookies may have an effect on your browsing experience.
Necessary Always Enabled
Necessary cookies are absolutely essential for the website to function properly. This category only includes cookies that ensures basic functionalities and security features of the website. These cookies do not store any personal information.
Non-necessary
Any cookies that may not be particularly necessary for the website to function and is used specifically to collect user personal data via analytics, ads, other embedded contents are termed as non-necessary cookies.
SAVE & ACCEPT